The "grab-a-table-and-start-exchanging" format is working well and as these see everyone talking at once in several different languages, these have now been labeled "Jamboree" sessions.  This December meeting was again much enjoyed with hot spots covering, weaving (Eilidh, using composite fibres in looms), robot races (inconclusive........teknikel issues.......), Organic piano (covering 1.2 and a bit octaves), Sketchup (Duncan, modelling components for a foldable cycle trailer),  RISCOS with GPIO on the Raspberry Pi and giant Lego (much enjoyed by Tom and Eilidh's little Ceilidh - age 3).

We also had member Alex Leggatt Skype in from Edinburgh.  Our roving vidcam and microphone succeeded in sending only cacophony to Edinburgh and Alex has pointed out that there is room for improvement (Isn't there always....?).   We have ideas - watch this space. 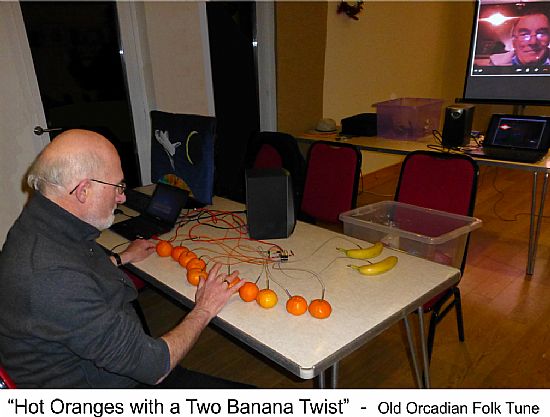 Howie is on the oranges, Alex is cornered in Edinburgh in the upper right.

Below is one of the parts for Duncan's bicycle trailer.  This has been 3D modelled in SketchUp.  When the other parts are defined, Duncan plans to build a kit of parts for the trailer using 3D printing.   Who is going to bethe first in the T-Exchange to get their REPRAP working? 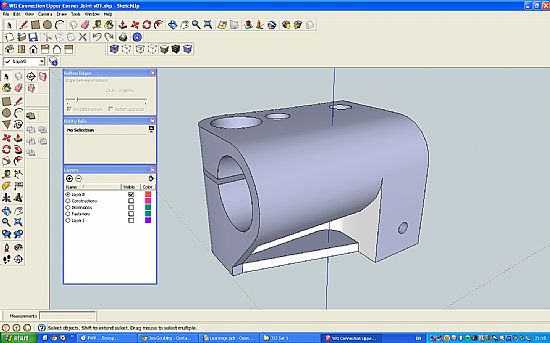 The meeting adopted the new "grab-a-table-and-start-exchanging" format.   Once again there was lots of noise with eleven members "interacting".

The  great success of the evening was the first positive steps of our first autonomous robot.  Built by Scott and John TEX, the Arduino brained insect, struggled into life at the October meeting but has now speeded across the floor at several meters/hour.   Clearly, the gait demonstrated by Howie at the last meeting has now been learned by the Arduino. 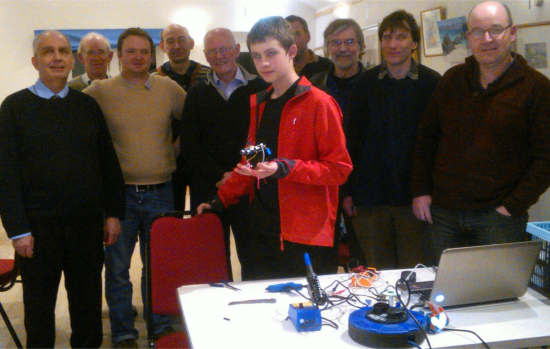 Everyone likes to be associated with success.........

A second team were busy at another table building a "second generation" robot.   As this one appears to have six legs, we are all looking forward to a more advanced gait demonstration by Howie.

New member Mark appeared with a dual axis digital magnetic compass, which he intends to build into an autonomous boat.  No gait instructions required.  Another success was the construction of an interactive table-top screen built by Tom.   He was able to demonstrate this using a video but hopes to bring the real thing along to the next meeting.   Bill demonstrated the new alternative RISC OS Pi operating system for the Raspberry Pi.   As this was written specifically for 32 bit ARM processors by Acorn, it boots and runs much faster than the LINUX Raspbian OS and has thousands of APPlicationS available.  The included BBC BASIC language is ideal for beginners who would like quick results.   Bill also demonstrated an 8 port GPIO buffer for the Raspberry Pi and the Python code to run it.  The buffer is built on stripboard and details will be uploaded to our site library.

This was the first of our new format meetings with a number of parallel activities and much more of a free format.   As a result we could smell solder vapours from the DIY table; hear screams of laughter from the table evolving an Arduino controlled, four-legged, walking robot; sighs of despair from the "deep SketchUp" table trying to find work-arounds for advanced geometry screwups and deep, concentrated silence from the table investigating Raspberry Pi programming; all to the sounds of a banana piano.

Perhaps the highlight of the evening was a hands-and-feet-on demonstration of the limb motion sequence for the desired gait of the Arduino robot.   This was performed by our resident Dr. Firth who was much, much fitter than expected and who performed the gait to much aclaim. 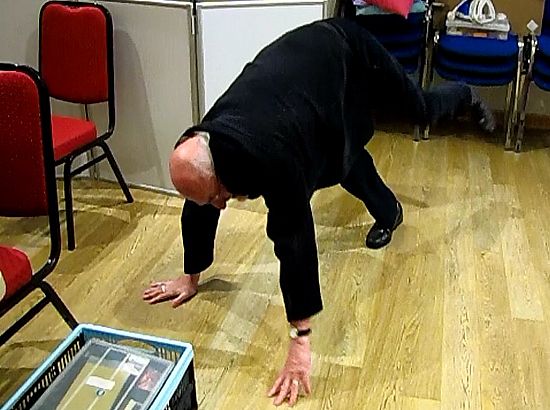 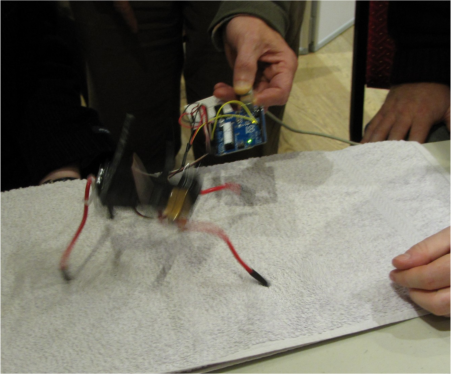 Here is TEX, Scott's Arduino robot trying to emulate Dr. Firth's demonstration.   As he is still attached to the motherboard by his umbilical cord, he is struggling a bit (well, a lot really....) but TEX and the rest of us are looking forward to a second lesson on gait control at the next T-Exchange meeting on 15th November.

As this was a jam session, there was a very heavy emphasis on raspberry pi(e)s of various varieties and flavours.   Fortunately, only the edible variety were eaten (with gusto).    However, all varieties were digested. 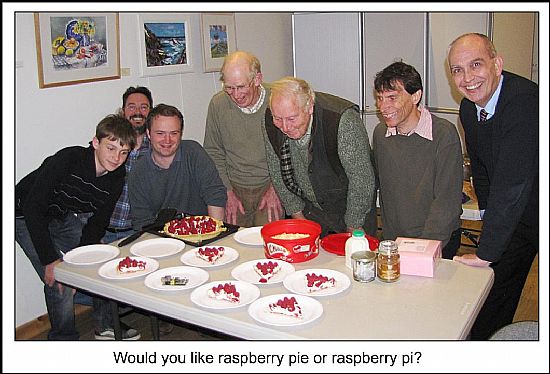 Much proding and questioning went on and much was taken on board.   An introduction to Linux from Tom settled everyone and we are all looking forward to the next workshop.

After the first lot of tea and biscuits, Bill got underway introducing the very low cost Genie range of micro-controllers.  These are 8 bit processors but are available with various non-volatile memory capacity and a number of printed circuit boards.   With 4 analogue/digital plus 4 digital only inputs and 8 digital outputs, these are very capable, but simple controllers.  Programming diffficulty is lowered to a whole new level with a drop and drag graphical programming method.  One of the Genie boards demonstrated illustrated a set of pedestrian controlled traffic lights total cost around £4-£5.   The program for this is copied here. 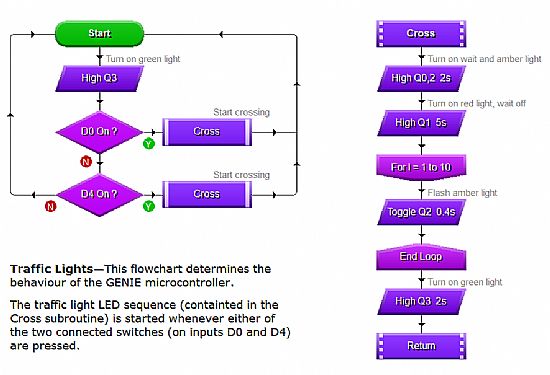 Another of Bill's projects on a soldered strip board showed how a Genie controller could be used to control 8 PWM servos.  This could form the basis of a walking insect.  Goto www.genieonline.com for full details of these very useful, very cheap devices.

After some more refreshments, Maarten waxed lyrical over the Raspberry Pi and launched into an in-depth explanation of how to get the Pi up and running.   He followed this by hints & tips on using the latest Linux OS.  The piece de resistance was his demonstration of how to program the Pi to drive a small robot arm available from Maplin (Ref A37JN).  This arm can also be used on a PC and is supplied with the necessary drivers.   However, Maarten (a true hacker) is hell-bent on upgrading the robot arm servos to full feedback control on the Raspbery Pi for improved precision and location stiffness.    In a very engrossing discussion he explored the possibilities with the members.   See the picture here and for more on the Raspberry Pi, see our HOT TOPICS page. 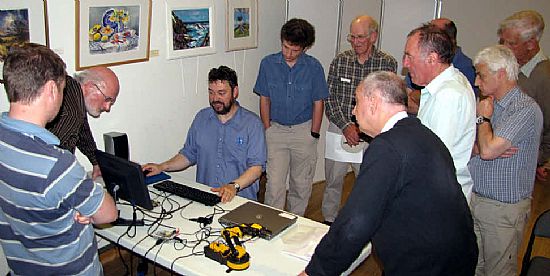 This was a very busy (late) evening with eight members attending and everyone with lots to say (and contribute).   Firstly, Bob Sims arrived from Inverness with his Prusa 3D printer.  Although not yet spinning plastic Bob's machine is fully functioning with the X,Y, and Z axes all happily dashing about under the control of his own geometry definitions.  We're all looking forward to seeing the first parts made by the first machine running in our group.

Secondly, Maarten de Vries stunned us all by producing several cathedral organ recitals (well it sounded like that) using the freeware Synthedit.   This synthesiser is not so much a music generator as a versatile sound generator.  Realising that there were aeromodellers present, Maarten went on to “run up” a Merlin engine and then two together (slightly out of sync to be authentic) and finished off with the throaty roar of four Merlins simulating a fully loaded Lancaster taking off.

This versatile software is freely available and Maarten has placed details of how to download it and a use it on the T-Exchange Library.  He has also promised to run a proper workshop later in the year and we are all looking forward to that.

Bill Graham then introduced a bit of simple electronics using the ubiquitous 555 timer chip to produce a pulse width modulated signal (PWM) suitable for driving a standard hobby servo.  T-Exchange kits of parts to build these signal generators are available from Bill.   Bill also rolled out his radio controlled model Mars Rover, which  uses PWM control signals.  The model has a CCTV camera on board and can send motion pictures back to “base”.   It is used in schools by pupils to explore the geology of “alien” places such as the school kitchen and staff room from the safety of their own classroom.

Bill then demonstrated his Raspberry Pi micro-computer that had arrived the previous day.  It had been easy to download the operating system and get the images up to a high resolution screen via an HDMI cable.

The Raspberry Pi machines use Python as the default programing language and, as Scott Boyle had written a number of games programs in Python, examples were rolled out and demonstrated.  Maarten has posted a “T-Exchange Absolute Beginner's Guide to Python” on the T-Exchange Web Site Library.

In between all this there was lots of animated discussion with contributions from Alex Leggatt, Howie Firth and Ian Hampson.   Lots of tea, coffee and biscuits were consumed.