We had a good turn out, considering this was a fantastic summer evening, with Findhorn Bay calm and the attractive 'fragrance' of barbeques wafting around; not forgetting the number of members off on holiday.  Tom McCallum and Les Grosvenor, were busy with the Mendel90 printing components of a pedal adapter and leg brace for a child's bicycle.   The plastic was a beautiful (to a child) violent violet.   After the machine got busy Tom turned his attention to the software he is developing for the Nelson's Tower, video sytem.

New member Julian Walford was exploring with others how best to go about making a 3D print of the skull of a Cave Bear.  The print is needed to permit the production of skull replicas for distribution to British museums.   We had already printed out a model of one of the teeth from the skull as shown here.

Compared to a dog's canines that looks scary enough, so a full size skull would be quite awesome.

Bill Leslie and Tim Schroder  were busy discussing how to build a next generation autonomous robot with high resolution navigation, while Howie Firth and Reiss Watson were dynamically liberating useful components from a a couple of large inkjet printers.  This is not a job for those who like to keep their hands clean...........   We are too embarasssed here to include example photographs.   Using the new PicoScope 2204A digital oscilloscope, Bill Leslie and Reiss Watson also had a look at the (neat...) pulse wave form produced by the optical encoder that Bill Graham has made for the Nelson's Tower 'Camera Obscura'.  See image below. 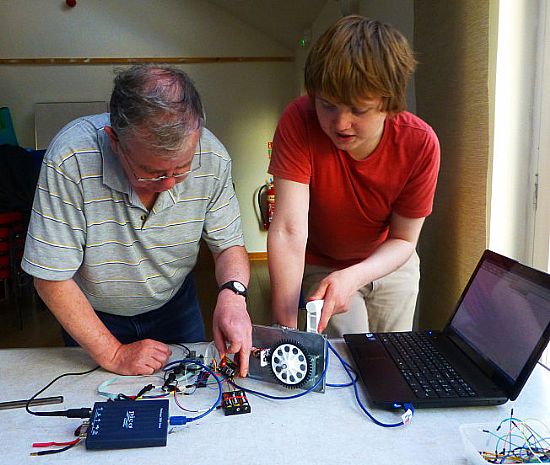 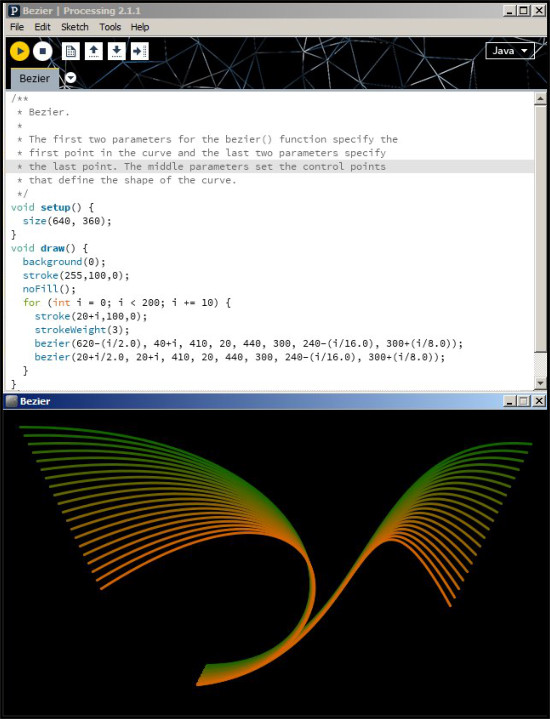 This was another busy evening with lots of table activity and two 3D printers buzzing away.   A record was set by the appearance of "Cyber" member Andrew Drummond who had made his way from Durness in the far northwest of Scotland just to attend a meeting.  Andrew had already built a 3D  printer and had a load of ideas about how to provide filament by reprocessing waste plastic.

Mark Dammer pulled up a table and some chairs and blogged through an introduction to the Processing language.   This language, which is based on Java but formated for programming beginners, is aimed particularly at artists or those who would like to create graphic images, animations or soundscapes.

A LearnDirect on-line course from Monash University in Australia is due to start on 2nd of June for six weeks and five T-Exchangers have already signed up.  If you are of an artistic bent and would like to use code instead of paint, this is for you.

An example of what you can do with a few lines of processing is shown on the right.

NB  It is possible to model in 3D as well as 2D and the export STL files for 3D printers.

Mark is going to mentor us through this course via the T-Exchange Google Group.   If you are interested in finding out a bit about using processing but not in joining the on-line course, you could join the Google Group and follow the thread.

While attending Mark's table, Bill Graham had his 3D printer bizzzy for two hours printing out a nosecone for an RC model aircraft.  The SketchUp view shows the shape changes from a square (or rectangle) at one end to a circle (or ellipse) at the other.   In this case the circle lines up with a propellor spinner.   In the image below you can see that the four screws for bulkead fixing are built into the part.   Could you do this for £1.50, without a mould, a using a glass-fibre lay up or a blow moulding machine? 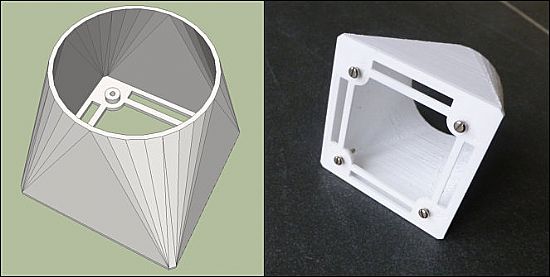 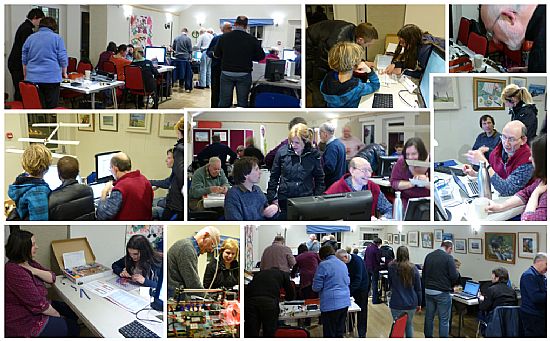 This evening was perhaps the busiest we have ever held with around 40 people milling around at times. Visitors for the open evening were very enthuiastic with ages ranging from 3-4 years all the way up to up to 3-4-years-at-heart.    There was a noise level to match, with two 3D printers running, and an awful lot of verbal exchanges (well, gentlemanly and ladylike Q & A sessions).  It was definitely a very worthwhile evening with a certain level of enlightenment gained all round.

We must do it again.

In the meanwhile, put a note in your diaries for Saturday 27th September when we are planning to hold a "Science and Ingenuity" event in the Forres Tolbooth Court Room as part of Culture Day.

Thanks all round to:

Scott Boyd on the Arduino
Bill Leslie handling various species of autonomous roving beasties
Mark Dammer with his satellite tracker
Tom McCallum and Claire Griffiths cooking Raspberry Pi'es
Duncan Easter on 3D computer modelling using SketchUp
Les Grosvenor and Bill Graham on the 3D printers
Howie Firth and Reiss Watson on deconstruction including the release into the wild of several springs
Ian Hampson and Richard Allan on adding a certain amount of value to an electronic kit
Elidh and Holly Myrvang Brown for designing tartans to order on a RISCOS Raspberry Pi
Lucy and Sorcha Dolan on Snap Electronics for Newbies.
Several Roving Minstrels for rendering pieces on the Carotine piano
Callum Cameron and assorted wiper-uppers for keeping the tea-exchanging
Pam Graham for photographically capturing the montage moments above.

Before getting on with the usual Focus table sessions the formal business of our second AGM was tackled.  This involved receiving the cryptic reports of the office bearers, approving the proposed first constitution of the T-Exchange, thereby putting us on a formal footing for the first time and then disposing of the chocolate cake and butter-ice sponge, gratefully provided by the Chairman's lovely wife for our second birthday celebration. 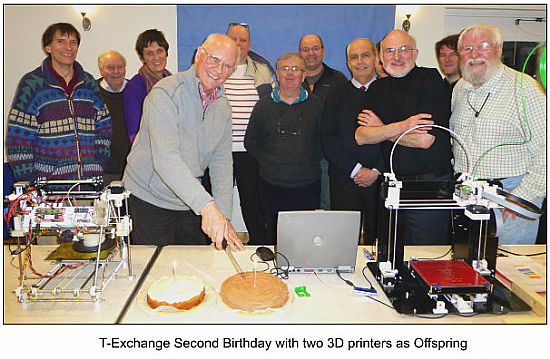 Since the cakes were sliced, diced and  "Oh... nice..."ed quicker than Sic3r can produce a G-Code file of a short fat cylinder, it didn't take long for the meeting to settle down and get on with the proper business of making things.