See below for 'what happens at the STEAMIE'

In addition to the trustees appointed at the Seventh AGM Brice Goureau has been appointed to the board of trustees.

During the year both Howie Firth and Les Grosvenor resigned as trustees.    The four remaing trustees stepped down at the Seventh AGM on the 15th February, as required by the constitution.    A change to the constitution increasing the number of trustees to nine, with seven being elected and two to be nominated by the charity board was passed.  Subsequently, the seven members elected as trustees were:

On the 19th of July 2017 we were infomed by OSCR (Scottish Charity Regulator) that our application for charitable status had been accepted.   Consequently, The T-Exchange has become a legal entity in the form of a Scottish Charitable Incorporated Organisation (SCIO).

Our registered name is The T-Exchange.  NB The definite article "The" is a formal part of the name.

The initial Board consisted of the following Trustees:

A copy of our new Constitution can be downloaded from our LIBRARY.

If you have any quiestions please submit using the form on the CONTACT page.

A good number of visitors to the T-Exchange have said that they would like to come to our meetings but their Friday evenings are "pre-allocated" for various reasons.   To provide an opportunity for such people but also to allow members who never get enough time to sit down and exchange thoughts with others (one of our main aims) we came up with the idea of a monthly "hangout".

Anyone is welcome to come, without gizmos or gadgets, except a phone or tablet (full or empty of ideas) and join in for a chat over coffee.   We thought that an ideal venue for this would be The Social Area of Horizon Scotland on Forres Enterprise Park.   The Social Area has recently been improved by the addition of a small cafe selling, tea, coffee and bacon butties etc, - on weekdays, until 3:00pm.   Their objective is to attract more people into Horizon Scotland and get them exchanging ideas.   Of course, this is exactly what the T-Exchange aims to do.

So, whether you are a retired maths/physics professor, an unemployed school leaver, an artist looking for new media, an engineer looking for a creative challenge, or somone thinking about a change in career, you are welcome to drop  into the STEAMIE Hangout  on the first Friday of each month, between 10:00 and11:00.

The main input to the Festival from the T-Exchange focussed on fashion and upcycling.   This was demonstrated by 3D printing on Family Day when members of the public were able to make a range of flowers, necklaces and bracelets.  These were made from 3D printed compomponents using a post-forming process developed by Bill Graham.  Also on show was a novel digital technique devised by Mark Dammer and applied to Schlieren photography for the visualisation of air flow..   The 3D printed flowers were evolved by member/artist Selena Kuzman and three artist friends to enhance fashion creations using upcylced materials.   These were exhibited on mannequins at various sites around Kirkwall during the Festival.

One shop widow display is shown below together with scenes from Family Day. 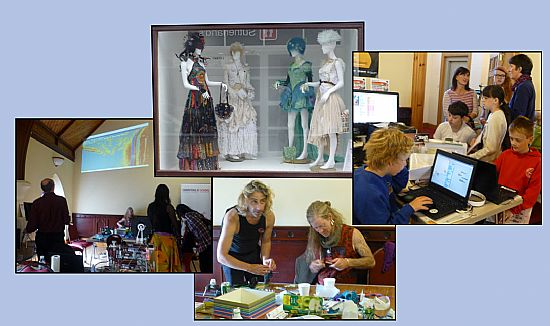 The Findhorn Bay Arts Festival ran from 21st to 26th September and included:-

The T-Exchange held our third Science and Ingenuity Fair on Culture Day,
NOT in the Forres Tolbooth this year but in The St. Johns Lodge.

The T-Exchange at The Orkney International Science Festival 2015

With T-Exchange member Howie Firth being the director of the festival, it was inevitable that other T-Exchange members were 'attracted' to contribute.  Mark Dammer and Bill Graham rushed forward with suggestions.  This resulted in five visits to Orkney Primary classes with Bill exploring forces, gravity , flight and how to get to Mars followed with Mark building 'Mission Control' skills with pupil groups on how to manage a 'Mars' rover. 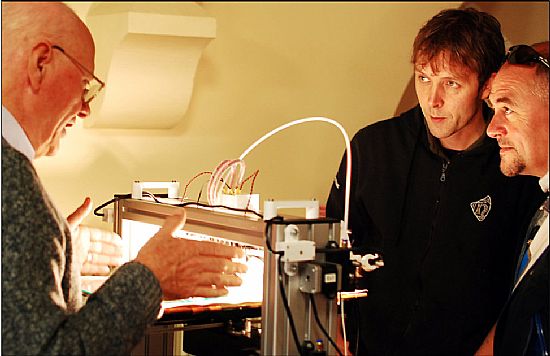 Since Saturday is also for working, both members took part in Family Day in the King Street Halls with Mark's face capture software counting the visiting public and Bill doing something on 3D printing.  Mark also explored 'Mars' again with all comers.

Great fun was had by all.